OK, so I'm looking at a SINK as a fishing platform ( I don't carry LOADS of gear - Rod / Reel / Anchor rig including reel and buoy / and a few traces, leads knife, pliers, and bait ) - Hmmmm that list looks bigger than I was expecting.

I guess most of this COULD be carried under bungee cord on deck but what issues does storing gear like this raise if you factor in the need to be able to eskimo roll ?

I also wish to know if a sail such as a windpaddle which is deck mounted would make rolling more difficult ( dangerous ) than with a bare kayak ?

I may well swap my anchor buoy for a drybag which I can inflate and deflate as required.

Sorry Chris missed this I will reply in full tomorrow (Monday). 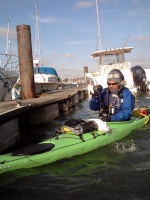